I held a storyboard class for young people at the V&A. It was well attended by lots of keen young writers, artists and animators. Average age around 8. I talked about an angel fish animation I’d been doing recently, but said they could do their storyboard about whatever they wanted. The Angel Fish began a run on Maritime themes. The story of the sinking of the Titanic was very popular, with astonishing statistical knowledge about the size, number of passengers and lifeboats aboard. The creators of the various stories gave me the casting vote on the true version of events, but refused to abide by my ruling. Understandable really, as my version of events was based on the film of the same name. There were a lot of great storyboards. An imaginative account of the death of a puffer fish was one of my favourites. 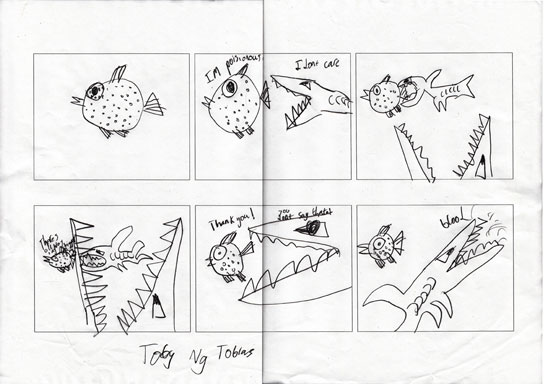